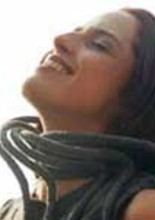 Fernanda Porto is a singer, composer and multi-instrumentalist from Sao Paulo, Brazil. This is her first album on Trama. Also known as the ‘voice of Brazilian drum n bass’, Fernanda composed and recorded the killer dancefloor smash Sambassim, which along with a remix by hotshot DJ Patife, is one of the highest selling drum n bass singles of all time. But it’s obvious Fernanda Porto is a whole lot more than a muse for drum n bass. In fact, her determination in single-handedly composing, producing and playing the instruments on this debut album is a tribute to her original musicality and uniqueness. Classically trained in music at University of Sao Paulo, Fernanda was one of the most respected students of electroacoustics and later went on to establish herself in earnest, composing the scores of a number of award-winning Brazilian films and later touring a live electronic band called Conexao Midi with the late Bebel-Gilberto producing Suba.
“Fernanda simply brought light into my life” recalls Patife, “ after the Sambassim remix, everything kicked off for me”.
Her debut album has gone gold in Brazil and will be released worldwide in September 2003, followed by a European tour in October - there’s no doubt that things are kicking off for Fernanda Porto!